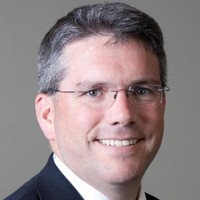 This week, we were able to induct two new members. One of them was Michael Pettyjohn. Get to know more about him by reading his introduction below, as read by his sponsor, Barry Nelson.

It’s my pleasure to share with you a bit about Michael Pettyjohn, a relatively new member of our community in the Trust Department at Pioneer Trust Bank.  Michael has served various roles in the financial services business for 32 years, including time as a loan officer, in banking, investments, private banking, landing about 20 years ago in the Trust business.

A “farm kid,” Michael grew up in Prescott, WA, a town of about 400 people near Walla Walla.  For college, Michael ended up at Washington State University (with apologies to Duck fans), where he ended up getting a degree in Ag Economics.

Until about a year ago, Michael made his post-college home in Walla Walla, where he joined Rotary around 1998.  Michael found his way to a Paul Harris Fellow “3 or 4 times maybe” over his years in Rotary.  When work took him to Tri Cities, he transferred his Rotary membership there, but after about four years of being unable to contribute the way he’d like due to travel for work, he discontinued his Rotary membership.

Michael and his wife, Kriss (with a K… and two S’s… because her dad liked the look of it better) have two daughters, ages 25 and 23, who live in Seattle and Kennewick.  Having grown up on a farm, it makes sense that daughters were in 4H.  The result of daughters being in 4H some 15 years ago was the inclusion of a couple of chickens into the Pettyjohn family, eventually taking the chicken count up to about a dozen.  With daughters now grown, Michael and Kriss have not been replacing chickens as they “mature,” being down to two at this time.  One of those two remaining chickens is the original chicken from 15 years ago.  You can imagine who Kriss treats as the most important living being in the household.

While Michael arrived in Salem about this time last year, it was in June of this year that they sold their home in Walla Walla and Kriss and the chickens came to join him.  They now enjoy exploring their new community on weekends, hiking, finding new little shops, spending time at the coast, or immersing themselves in area events and activities, such as “The Bratwurst Thing” in Mt. Angel.

Being in financial services, Michael knows numbers, but as is required in the business of working closely with peoples’ money, I think you’ll get to know Michael as a warm, friendly, easy to talk to, caring individual ready to step in and serve our community.